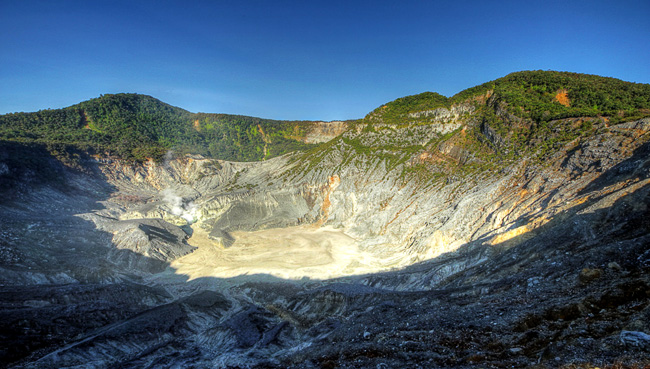 When visiting West Bandung Regency of Indonesia, tourists should never overlook the most famous natural attraction called Tangkuban Perahu Mountain. Not only it is known among the locals, the mountain has been acknowledged by foreigners too. Many things can be done on the site including sightseeing, photography, trekking, and hearing the urban legend related to the mountain from the locals. In terms of location, it belongs to Lembang Sub-District and has become the pride of Bandung City and its surroundings. Despite the long trip to get to the site, visitors won’t regret going up there.

The Nuance
To be exact, Tangkuban Perahu is a volcano and it has the height of 2084 meters above the sea level. In terms of width, it is around 3320 km. The nuance is cold and pristine despite the presence of rocks and sand scattered around the mountain. The next interesting fact is that the mountain features several famous craters including Ratu, Pangguyungan Badak, and Upas. Not to mention all of them are worth to visit too. Several smaller craters also reside there including Siluman, Domas, Suci, Jaurian, and Jurig. The biggest one is Ratu Crater and two of the craters (Jurig & Siluman) are considered dangerous due to the presence of poisonous gas.

Exploring Tangkuban Perahu Mountain
Trekking is a common activity to do in Tangkuban Perahu Mountain, Indonesia. The good thing is that visitors have many spots to explore, especially the set of craters scattered around the location. One of the most favorite sites to explore is Ratu Crater (which is the biggest). However, these days, tourists often come to Damas Crater for its hot spring. Some visitors even carry some eggs and cook them in it! As an alternative, they may enjoy mud bathing in order to soothe their skin.

The next popular activity to do in Tangkuban Perahu Mountain is to hear the urban legend related to the mountain. The name itself means the “faced down ship”. The ship was required by Dayang Sumbi to Sangkuriang (which was her son) as a marriage requirement. For further information regarding this story, tourists can ask either the local guide or villagers. As an alternative, they can take advantage of the help of a tour agent to hear the complete story of such urban legend.

As for the tip, it is better to come with a tour guide when visiting all available craters in Tangkuban Perahu Mountain, Indonesia. Even a trip to Domas Crater is considered risky, especially for beginners. Not to mention some of the craters emit dangerous gas. Thus, visitors should be more careful when exploring the mountain. It is better to be safe than sorry, no?

How to Get There
From Bandung City of Indonesia, tourists can directly head to Tangkuban Perahu Mountain located in Lembang Sub-District. The distance between these locations is 27.2 km, so it takes about 1 hour and 40 minutes to get to the site. It can even be faster if travelers come during working days and by private vehicle.