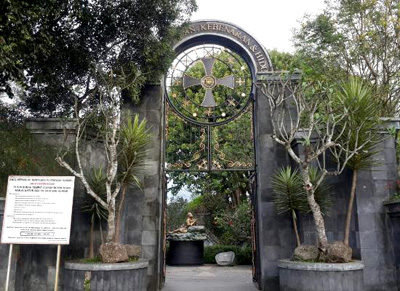 When visiting Lembang Sub-District in Indonesia, tourists should be aware of a recommended place for religious tourism called Karmel OCD Hermitage. Actually, it is part of the local monastery and it has become an interesting site to spend a serene holiday. The location is in Gudangkahuripan Village and it belongs to West Bandung Regency of Indonesia. Most visitors are those who want to explore the monastery and its beautiful landscape. Not to mention they want to find peace while enjoying hermitage in nature. Plus, visitors are likely to learn the story behind the establishment of this site.

The Nuance
The most noticeable feature of the site is definitely the park (where Maria’s Cave resides). It provides a facility for tourists to pray and site as well. No wonder, most visitors would come to the place either for praying or witnessing such calm activity done by others. Several flowers, plants, ornaments, and candles are also seen there. On the horizon, tourists can see the beautiful scenery of nature! Somehow, photography becomes a good alternative to others recommended activities to do in Karmel OCD Hermitage. This includes sightseeing, for sure.

Exploring Karmel OCD Hermitage
Karmel OCD Monastery features an interesting symbol, which often attracts tourists’ attention. In fact, it has an inspiring meaning. The symbol represents the journey of Karmel Order (the Karmelits/hermits), who lived in Karmel Mountain during the 12th century. The symbol also represents both contemplation and the life of prayers. For a further explanation regarding the symbol of the monastery, tourists can ask the keepers or tour guides later. Have no worries. There is no fee to ask such kind of information. As an alternative, visitors can ask others regarding the symbol or other facts.

The best time to visit Karmel OCD Hermitage is in May. At the time, Catholic people come to the site to both pray and conduct hermitage. Also, they gather in front of Maria’s Cave to perform Rosario prayer. What about non-Catholic people? Well, they can watch the procession comfortably and enjoy the nuance of the site. Once entering the gate, a serene atmosphere awaits them. Also, two small routes are available for them to choose from in order to get to the cave.

During the short trip to get to Maria’s Cave, tourists may see numerous shady trees and cement chairs. Once arriving at the site, they may see a moderate-size cave and the cross of Jesus near to it. In terms of nuance, it represents Golgota. Aside from this site, make sure to visit the chapel later! As long as tourists do not come in a group or cause havoc, they are good to explore the location thoroughly.

How to Get There
For those coming from Bandung of Indonesia, they need to find a good local transportation service and head to Lembang Sub-District right away. The distance is 17.2 km, so the trip takes approximately 50 minutes. Here is the thing. Make sure to take Setiabudhi Street and to come during working days. Once arriving at Lembang, the next destination is none other than Gudangkahuripan Village. Later, just ask the locals regarding the exact location of Karmel OCD Hermitage.