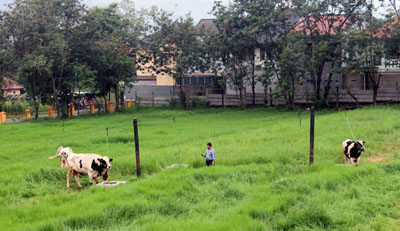 A vacation does not have to be the exploration of nature as many other fun options are available. For those who look for a new experience and knowledge, there is Lembang Artificial Insemination Center or BIB or 'Balai Inseminasi Buatan Lembang'. The location is in Kayuambon Village and it has been recognized by both the locals and foreigners due to its contribution in supplying frozen semen of cattle, including beef cattle and dairy cows. Today, the site has been there since 1975 and it becomes a unique tourist attraction in Lembang, especially for those who are curious about artificial insemination in indonesia.

The Nuance
Once tourists get to the site, they may see a lush savanna with lots of animals on it including cows, goats, sheep, and buffalos. The thing is that they are all males and they come both from foreign countries and local regions. The nuance is so soothing due to the strategic location, which is on a highland and surrounded by big trees. Several structures are also seen on the site including the office and sheds. Not to mention staff and workers are always ready to help visitors who want to get around the site during the visit.

Exploring Lembang Artificial Insemination Center
Before entering Lembang Artificial Insemination Center (BIB Lembang), the guests should get the permission from the staff. It is a good thing that there is no fee to enter this site and it opens for everyone, regardless of status. The only consideration is that tourists should come at the right time. It is bad to come when there is no nursery activity done by the staff, right? On the other hand, visitors can watch such process directly during the visit.

All races of cows are available on this site, which is quite impressive. Not to mention they have the weight of approximately 1 ton! The thing is that all these cows are males. It is because the staff would collect the semen of these animals and store it as quality seeds. Perhaps the most famous one is Benggala race, coming from India. Have no worries. Visitors are allowed to take pictures of those cows freely. It is even possible to conduct selfies!

During the semen extraction, the staff may feed the cow with stimulating hormones beforehand. Later, they collect the semen using an artificial female cow! What a unique way to collect quality seeds, no? Later, they might store the semen in a tube and keep it in a special fridge. At the end of the procession, the staff would bring the male cows to the open meadow until the afternoon.

How to Get There
It is easy to get to Lembang Artificial Insemination Center in Indonesia, even for those coming from Bandung City. First, take a local transportation service to Lembang Sub-District and head to Kayuambon Village afterward. This can be done through Djuanda and Dago Giri Street, actually. As for the distance, it is 16.1 km. That means the trip may take around 50 minutes to 1 hour.