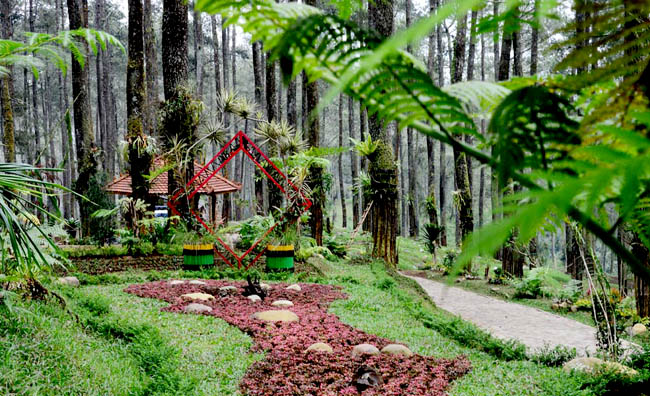 A unique vacation destination resides in Lembang Sub-District. The name is Orchid Forest and it belongs to Cikole Village. This natural attraction in Indonesia which is located in the midst of a forest and a highland. No wonder, tourists can relieve their stresses while exploring the site. Plus, they have the opportunity to learn various types of orchids and other plants that grow in this area. The fact is that the site has become a cultivation center for local orchids. Another significant fact is that many tour agents have included it in the list of the best vacation destinations in Lembang. What is more?

The Nuance
Lembang Orchid Forest has the width of about 12 hectares and it resides on 1500 meters above the sea level. Actually, the site is surrounded by pine forest, featuring old pines and other tall trees. At a glance, the nuance looks similar to that of Jayagiri Pine Forest. This also explains why the atmosphere feels comfortable and cool there. What is more? According to the management, the site owns more than local orchids. That means visitors can find other foreign species of orchids as well. Plus, a beautiful park resides in the midst of the forest, featuring stunning grassy landscape and gazebos.

Exploring Orchid Forest
Some people call Lembang Orchid Forest as the best natural attraction of the region. Well, they are not wrong, after all. The most reassuring reason is that the site combines lush pine forest and orchid cultivation center. Tourists won’t find another place that offers such collaboration in Lembang Sub-District, for sure. Knowing this fact, travelers often drop by to explore the forest and witness numerous species of orchids all at once.

It is, without a doubt, the main allure of the site is the collection of orchids, cultivated by the government. Many species of such beautiful flora grow there, so visitors can learn about them thoroughly during the visit. According to the keepers, there are about 150 collections of orchids, originated from different countries worldwide. That means visitors would find both local and foreign orchids, especially those coming from the USA, Venezuela, and Peru. Do not forget that rare orchids also reside there, including kantong semar and black orchid. Not to mention all of them are worth photo shoots.

Another good thing about Lembang Orchid Forest is the complete facilities provided by the management. For instance, visitors can find an outbound area for gathering. The location is in an open field under pine trees and it features a grassy landscape. Some fun outbound rides are also available on the site, but they cost some money. Make sure to carry enough money when visiting the park, therefore.

How to Get There
For those coming from Bandung City in Indonesia, the first destination is Lembang Sub-District. Later, they can take local transportation service and head to Cikole Village, where Orchid Forest resides. The whole trip may take around 1 hour and 10 minutes as the distance is 21.7 km. As for the best route, it is Dago Giri Street.