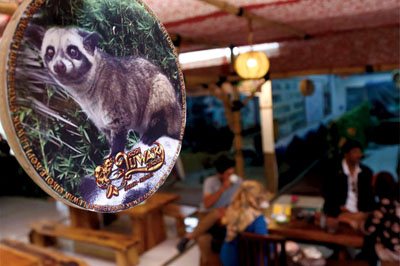 Most tourists would think about natural attractions when visiting Lembang Sub-District. Well, it is true after all. The thing is that Lembang owns more allures than those beautiful vacation destinations. For example, there is the famous Luwak Coffee of Cikole. As the name suggests, this delicious coffee is produced in Cikole Village and is recognized by both the locals and foreigners. Moreover, there is a special place to enjoy such luxury coffee in Cikole. This explains why tourists never miss the chance to drop by when spending a vacation in Lembang Indonesia!

The Uniqueness
Cikole’s Luwak Coffee shop offers a modest nuance with interesting views of nature. Even there is an educator team, who would explain the production of such popular coffee. Not to mention visitors are allowed to witness the process directly! Do not forget to take pictures with the mongoose (Luwak, too. Still, the most recommended activity is drinking warm Luwak coffee either with friends or families in this place. Somehow, it becomes a good site to spend a family recreation and relaxation. Thanks to the cool atmosphere and serene environment.

More about Cikole’s Luwak Coffee
Cikole becomes the best place when it comes to Luwak Coffee, especially for tourists who visit Lembang Sub-District. The good thing is that tourists can find several places to enjoy such beverage, including at the factory. Still, the most recommended place is at the factory where visitors can witness the production directly. Not to mention the price would be cheaper as compared to coffee shops or cafés. There is even the chance of bargaining and getting a more affordable price (especially with the help of a tour guide).

Aside from enjoying the coffee, tourists should ask for information regarding the history of such delicious beverage when visiting Cikole. It is said Luwak Coffee has been produced since the colonialism era (during Culture Stelsel), in the 19th century. At the time, the locals suffered a lot due to overwork at tea and coffee plantations. Regardless of the difficulty, it brings good fortune to the nation these days. Not to mention the local coffee has undergone some improvements in terms of quality. Tourists should ask the tour guide for more information, though.

The locals use Arabica coffee in order to produce Luwak Coffee. They involve mongooses during the production, as well. The aroma is excellent and the taste is superb! No wonder, the price is quite expensive as well. Foreigners are fond of this type of coffee and they consider it luxurious and precious!

How to Get There
The distance between Bandung City and Cikole Village is 21.7 km. That means the trip may take around 1 hour and 10 minutes to get there. But, first, travelers should visit Lembang Sub-District through Dago Giri Street. For a more efficient trip, it is recommended to hire a local guide. He can even give more information regarding local’s Luwak coffee thoroughly.