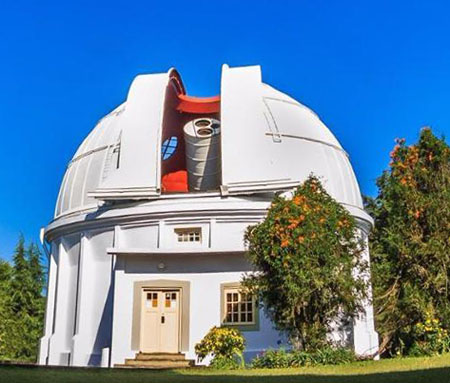 Bosscha Observatory has become a significant lure of Lembang City and West Bandung Regency for decades. As the name suggests, tourists can witness beautiful sky at night using the famous giant telescope called Zeiss. The location is in Peneropong Bintang Street, so it is quite accessible for everyone. The fact is that the observatory has been there since 1923 and it was built during the Dutch colonial period! It is true that the site functions as an attraction for tourists, but it also acts as the place for researchers to study more about astronomy.

The Nuance
In terms of nuance, the observatory resides on a beautiful landscape surrounded by trees and green grasses. The structure has the shape of a dome and it features only white color. As mentioned before, the main feature of the building is Zeiss telescope, which is also quite adjustable. Despite the fact, other types of telescopes are also available including Schmidt Bima Sakti, Bamberg, Cassegrain Goto, Unitron, Surya, and Radio 2.3 M. In terms of size, the building is not quite big, so it would be uncomfortable when too many tourists come at the site during holidays. Have no worries. The management has arranged schedules for different types of tourists in order to avoid such discomfort, including students and common visitors.

Exploring Bosscha Observatory
Bosscha Observatory is chosen as a recommended place to spend an educational tour, especially for students. For those who never visit the site, though, they need to review the schedule first before coming to the observatory. There are two schedules of visit, either during the day or at night. The observatory opens from Tuesday to Saturday (between 9 am to 13 pm). Also, there is a limited number of visitors every day, which is around 200 people.

What about the night visit? The observatory opens from 5 pm – 8 pm. The only consideration is that tourists must come during good weather when there is no fog or rain. Otherwise, they won’t be able to see the sky clearly and comfortably. Also, make sure to carry enough money to pay the ticket. Even the staff would charge everyone regardless of the age, even the kids.

Another lure of Bosscha Observatory is the scenery of the surroundings. These include old houses (built during the Dutch Era) and beautiful green field. As for the tip, do not forget to carry a camera during the visit. For those who want to use the telescope at night, make sure to come during the dry season which is between April and October.

How to Get There
From Bandung City Indonesia, the trip may take around an hour as the distance is 17.5 km. This can be done through Dr. Setiabudi Street and use any type of vehicle. Once arriving at the gate of Bosscha Observatory, it takes several minutes of walking in order to get to the building. The distance is 2 km, actually.