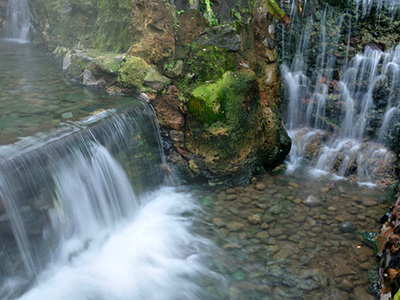 Once enjoying beautiful nature of Lembang Sub-District, travelers should relieve their tiredness at Ciater Hot Spring. The location is in Nagrak Village and it belongs to Subang Regency. As tourists may expect, they can take a bath in such comfy public bath, which is both warm and healthy. The other name is Sari Ater Hot Spring and it has become tourists’ favorite spot when it comes to lessening. Not only it is popular among the locals, the hot spring has lured several outsiders and foreigners who are interested in it.

The Nuance
Where does the hot water come from? According to the locals, the source is located in a nearby volcano, Tangkuban Perahu (which also owns an interesting legend). The locals have built a pond to contain such hot water and mix it with fresh water. As the result, it becomes warm and safe for bathing. The area has the width of about 30 hectares and it features beautiful mountain views as well. Not to mention the pond features unique landscape and ornaments to increase its aesthetic value. No wonder, visitors feel content when spending some time at this site.

Exploring Ciater Hot Spring
The first thing to do in Ciater Hot Spring is to learn its history. According to the locals, the site was once a haunted forest. Plus, lots of big trees grew there! It is said a villager wanted to chop down one of those trees. While chopping, he was startled by the sudden burst of water coming from such tree. Instead of being afraid, he felt grateful to the God. Due to such new source of water, his village suffered drought no more. Despite the legend, the hot spring was inaugurated as a new vacation destination since 1960. Mr. Embos introduced this site to the society. Thanks to him.

Almost all visitors want to get in the hot spring and take a bath in it. After all, the pond is safe for both kids and adults. The locals even believe that the water brings good effects to their health and skin! No wonder, lots of people keep coming to the site in order to conduct therapy and get rid of stresses caused by busy daily routines.

Another great thing about Ciater Hot Spring is the environment. The site is surrounded by lush and clean nature, featuring some tea plantations near to it. Even a beautiful waterfall resides in this area! For those who look for a better privacy, they can rent VIP rooms instead of joining other tourists on the public pond. They need to pay some fee to get such benefit, though.

How to Get There
From Bandung City, travelers should head to Subang Regency first. The trip may take around 1 hour and 20 minutes as the distance is 29.9 km. Later, their next destination is Nagrak Village where the hot spring resides. For a faster trip, make sure to take Dago Giri Street, though.