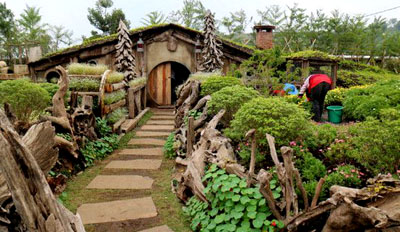 An interesting vacation destination resides in Lembang Sub-District called Lembang Farm House, Indonesia. This famous place has become quite phenomenal these days due to its unique concept. In a nutshell, it combines plantation and stock husbandry, applying European style as well. The location is in Gudangkahuripan Village and it belongs to West Bandung Regency. This site is considered new, but it has gained lots of popularity among both locals and tourists. Another important fact is that this place belongs to the same business group with Sosis House, Floating Market, and D’Ranch!

The Nuance
In terms of nuance, Lembang Farm House offers a European atmosphere. That means visitors may feel that they spend a vacation in a foreign country. Once they get in, numerous types of plants welcome them. The next noticeable feature is the giant container of milk located near to the entrance. Next, there are two parks offering different attractions to the guests. These include the artificial waterfall and Cactus Park. Several birds and exotic animals are kept on this farm, as well! Perhaps, the most amusing feature of the farm is the Hobbit’s house, which is similar to that of Frodo Baggins’ of the Lord of the Rings!

Exploring Lembang Farm House
The most noticeable charm of Lembang Farm House is definitely its nuance, which represents a particular urban area in Europe. That means it is both romantic and exotic! Once tourists get in the farm, they can start to explore it and take some pictures in front of any unique objects including the hobbit house. This structure has a small size with distinct design, which is similar to that of the New Zealand’s. It is possible to enter the building, but tourists should bend their body to pass through such hobbit house.

As for girls and women, they have an opportunity to try unique dresses that represent European style in the earlier times. The thing is that they must pay the rental fee for those dresses hourly and the price varies depending on the type of dress they are going to use. The most popular ones are Cinderella and maid dress, actually. Next, tourists should approach the site where “Gembok Cinta” resides. It is the place where visitors can leave a padlock, representing the unbreakable love with their lover!

What is more? The next attraction is a mini zoo where tourists can witness several types of birds, rabbits, and other animals. Somehow, this place is suitable for photography as tourists are allowed to take pictures of those cute animals. Later, before going home, they can exchange the ticket with either a sausage or a cup of milk at the available booth!

How to Get There
For those coming from Bandung City, their prime destination is definitely Lembang Sub-District in West Bandung Regency, Indonesia. The distance is 15.6 km, so it takes around 48 minutes to get there. As for the route, they can take Setiabudi Street. Lastly, they can simply head to Gudangkahuripan Village where the farm resides.